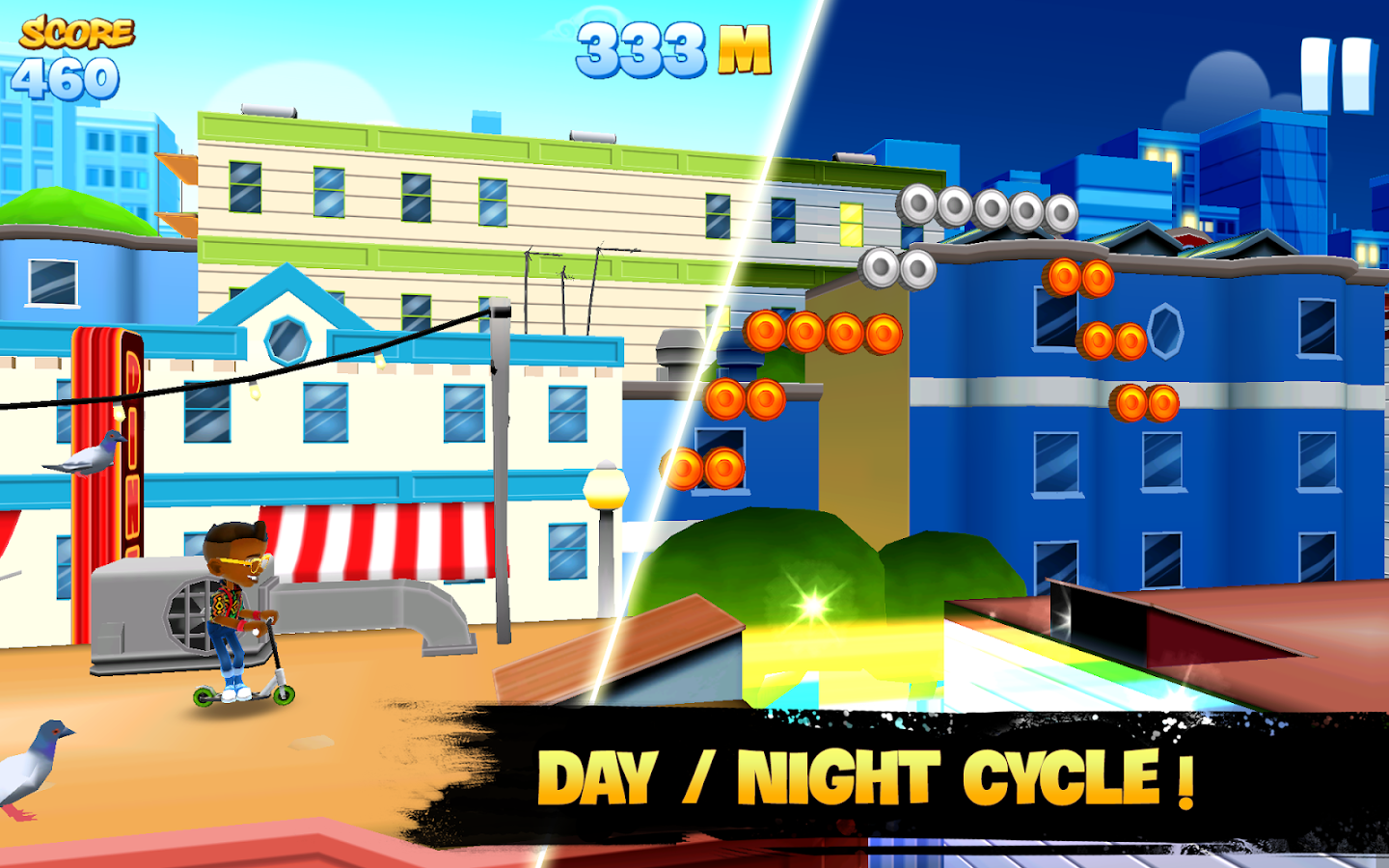 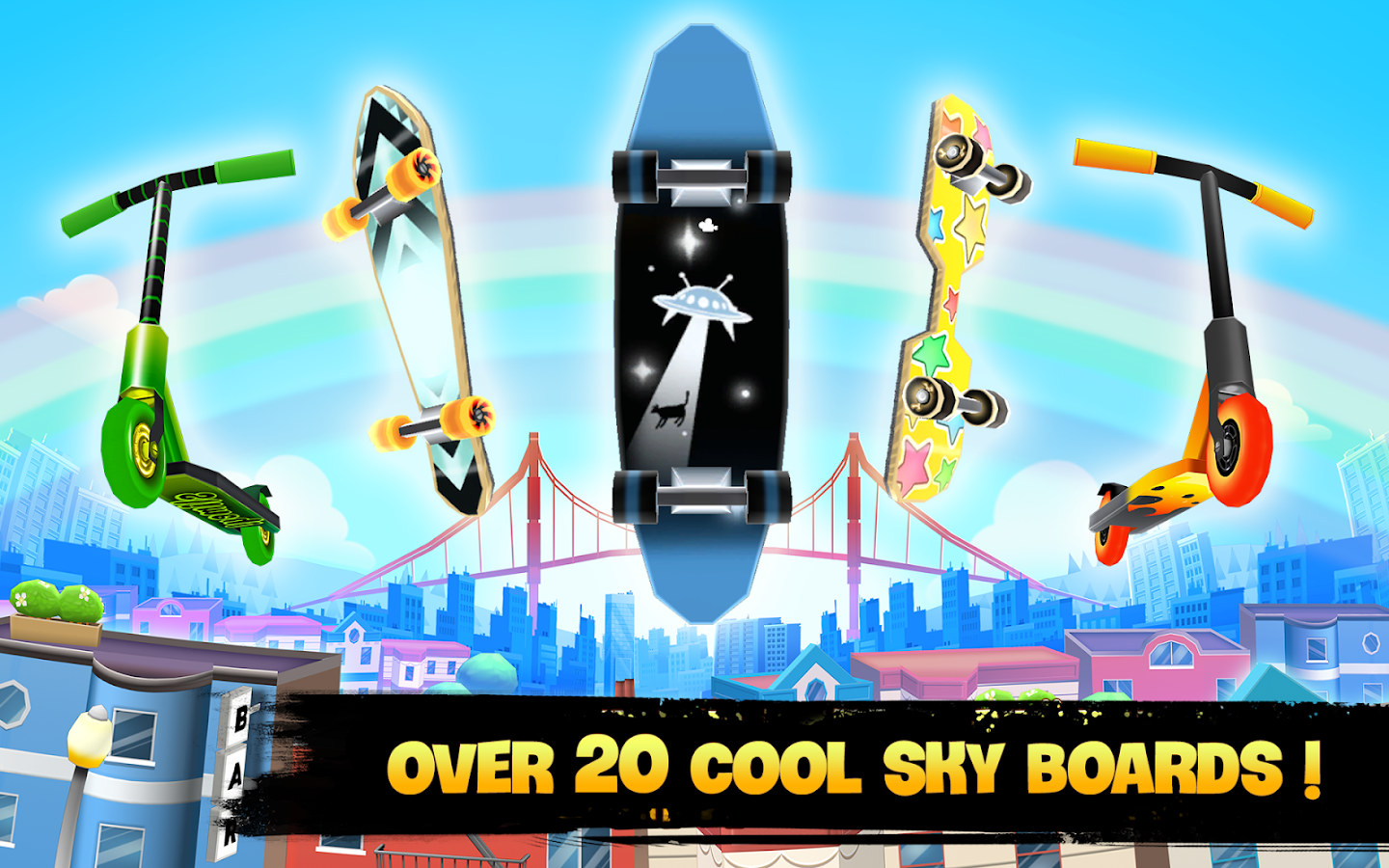 Skyline Skaters is an endless skating game where you are trying to escape from the police who shows up very often in an helicopter with the intention of capturing you. However to escape will take great skill, timing, good reflexes and the ability to skate. The first time I played Skyline Skaters I literally fell in love with the game, it was like love at first sight. Now it is not one of those shooting games that I love so much nor is it about some role playing games, some might even say there is nothing fun about it, but I have found this game to be very addictive.

Skyline Skaters is similar to Subway Surfer (please see review on Subway by CLICKING HERE) in terms of your character got caught doing something that you should not be doing and then having to escape from a dog, in this case an helicopter. Similarly, often times the location or settings of the game changes, this day you may be in New York, and at the next update you could in Rio. This no doubt keeps the game fresh and exciting as with new location comes with new stuff and obstacles, even new characters (Skaters) to try out. 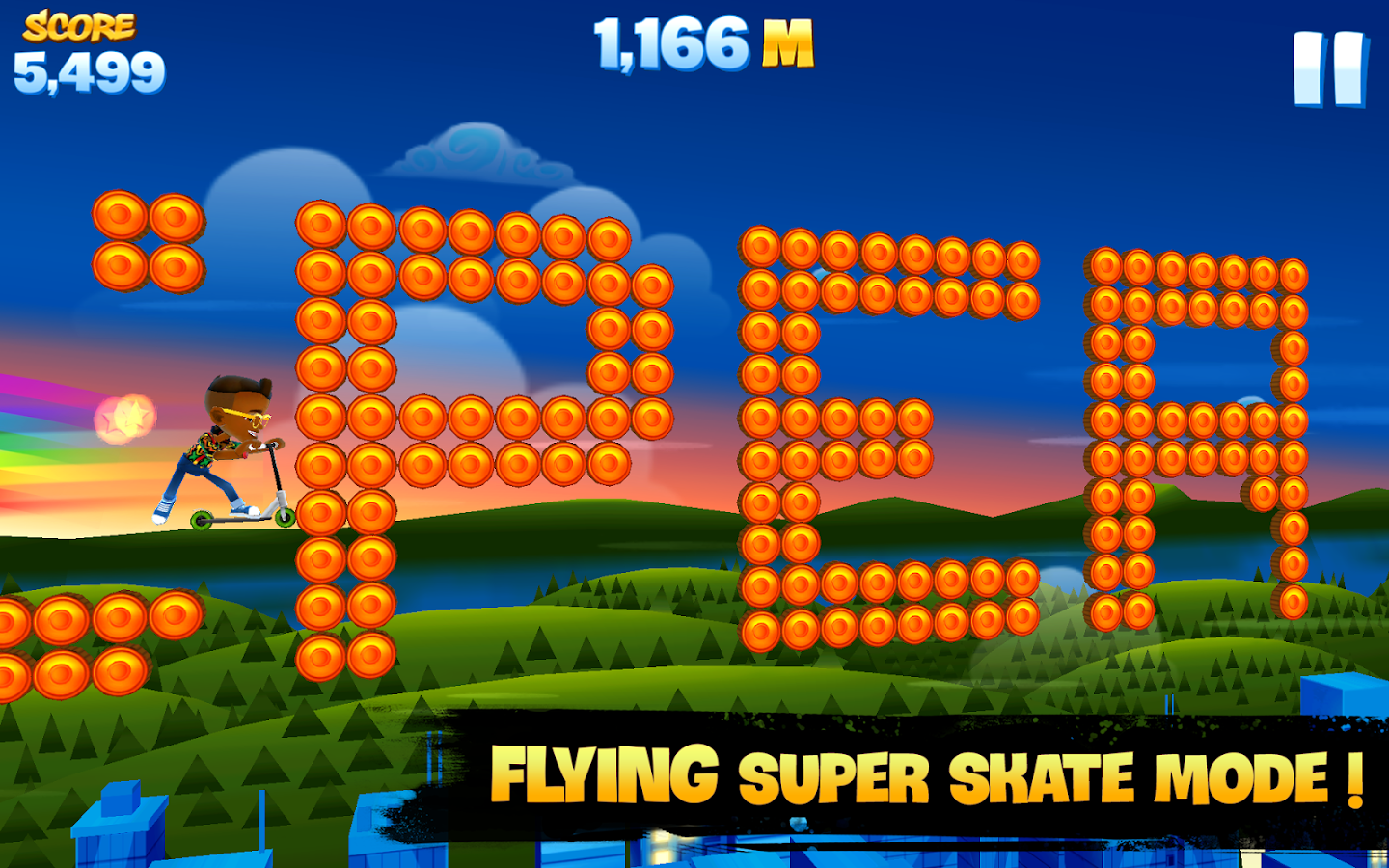 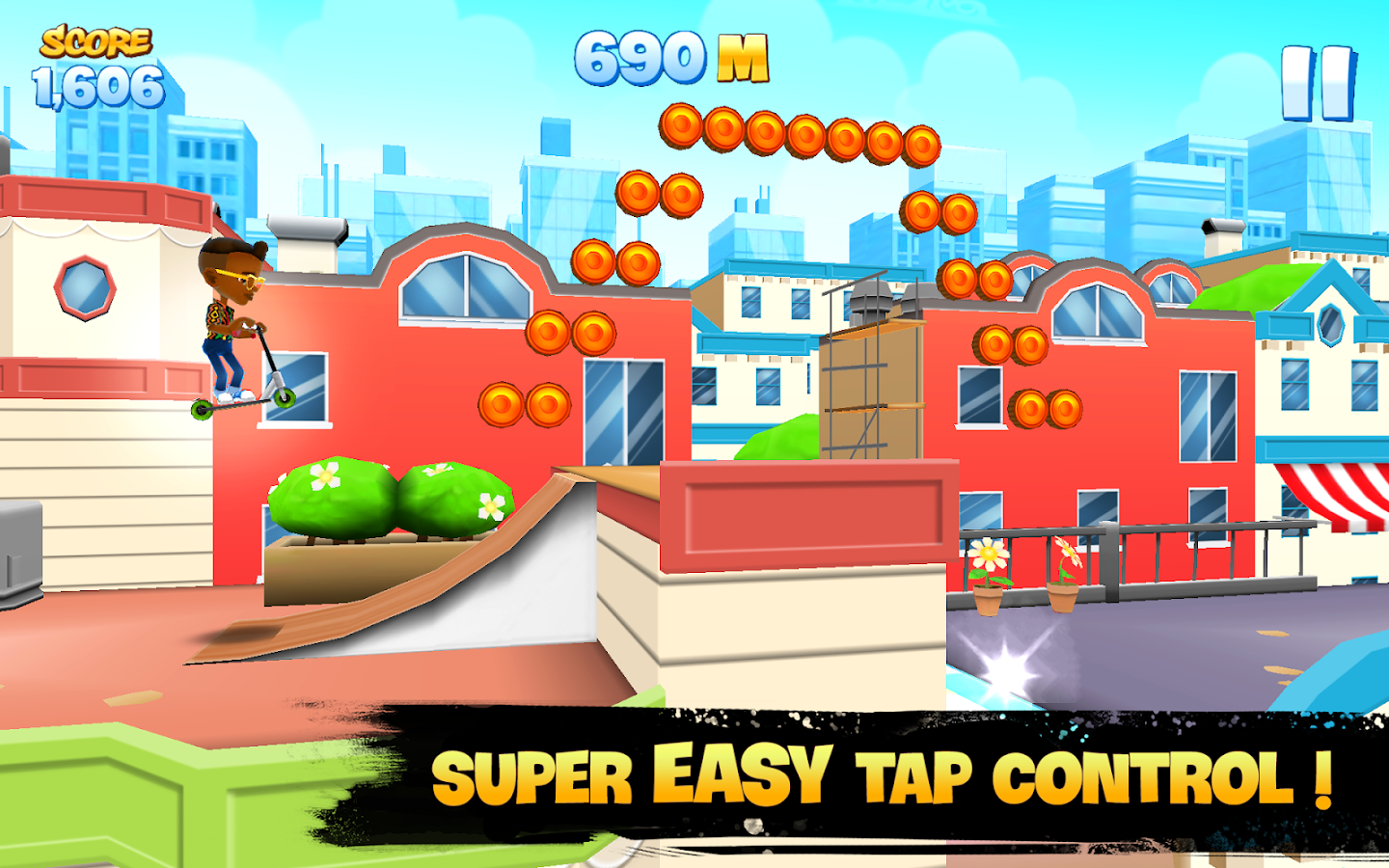 Gameplay
Skyline Skaters is a simple tap the screen to play, similar to Subway Surfer but at the same time a little different, kind of game. There are many different obstacles in your way to either slow you down or end your life, obstacles such as cameras (as you are playing on the roof), steps, railings, cones amongst others. You also have to jump over both small and wide holes. Gameplay regardless of location you are playing is played on a rooftop.
To go far is depended on how quick you are, precision and timing, and focus. However, if lose your life, which you will, you can revive and continue by using game currency in the form of money, coins are use for others thing like buying stuff in the shop or new characters etcetera.
Your job is skate as far as you can jumping over obstacles, dogging missiles, sometimes one after the other, while collecting coins, and there is a lot to collect. As you skate you are able to collect different power-ups (which have to be unlock using coins in the shop before they will be shown in the game) to help you reach far such as, magnets, rockets, rainbows which allow you to skate right across holes, shield which will protect you from missiles. One of the many thing I like about this game is that you can collect letters which are used to form out words, when a word is form from the letters you collected this is called Super Skate which gives you opportunity to skate in the sky for few seconds collecting tons of coins as your reward for a job well done.

For the past few weeks the developers of Skyline Skaters have really added some new features that I like very much. You are now able to qualify for World League depending on points you have scored in the game. It is like a tournament kind of thing. First there is the Newbie League which doesn’t require any points to qualify for, then you have Street League, Pro League and finally Elite Leagues. There is also the addition of scooters that you can purchase and use if you are not feeling up to using the traditional skaters.
There is also a Daily Event you can participate in (participation is automatic) to win a daily prize which is very similar to completing missions. The main difference between these two is that while with the regular missions where each mission you complete your character’s rank goes up, Daily Event, which is a daily thing, you have to complete all the missions asked for in order to win a prize.

What I don’t like about this game is that regardless of which location you are playing whether it is New York, Rio or any other location, the obstacles doesn’t changes, only the background. This to me is a big turn off as I was expecting a change of obstacles, how the roof looks etc.

Regardless of this Skyline Skaters is a very fun and addictive game to play and deserves your attention. As with other games you are able to enjoy the game with friends and try to complete different missions, some of which is very hard, which i guess is this way so as to have you playing for longer hours. Each missions completed will give you 4 game currency cash and increase your rank, the higher you rank the more money you will earn.

Newer PostIOS 8, Improve and much better: what you should know
Older Post How To Update Your Iphone, Ipad or iPod touch

Skyline Skaters You have heard about endless runner game, but have you ever h...

If you go skating or skiing often then you will some of the perils many persons ...

Cars: Fast as Lightning Review- Lets Build and Race Together

Buckle up and let’s race as Gameloft have done it again with another awesome, be...

The Walking Dead: The Game Season 2 review- A telltale series of 5 Episodes

Canadian residents will soon be able to use Apple Pay

Apple sued by Monster over acquisition of Beats headphones

Google posts Windows 8.1 issue picked up by Project Zero before Microsoft can fix it